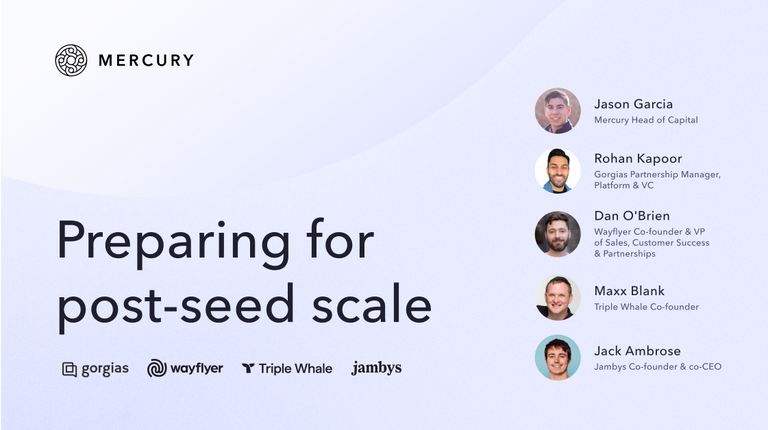 At our virtual event Preparing for post-seed scale, Rohan Kapoor (Gorgias), Dan O’Brien (Wayflyer), Maxx Blank (Triple Whale), Jack Ambrose (Jambys), and moderator Jason Garcia (Head of Capital at Mercury) discussed seed capital, from when DTC brands should decide to raise it to the implications of bringing on early-stage investors.

Catch up by watching our event video or read through our key takeaways.

Seed capital has its benefits: It can gain you legitimacy and be invested into aspects of your business that help you grow, like R&D and new products. It can also help with hiring.

According to Jack, when Jamby’s found people they wanted to work with, they hired them part-time. The team knew that they wouldn't be able to pay full-time salaries. Once Jamby's raised its seed round, the team brought the talent they wanted on full-time.

“A seed investor can really help you navigate your full-time hires,” adds Dan. “Your first five employees are going to be the ones that drive the company for the foreseeable future, and getting guidance around that is really helpful."

This mentorship is a key quality to look out for when scouting a seed investor, explains Maxx. “What’s worth the equity is someone who’s done this before. No one’s got all the answers. As a founder, being able to get easy access to answers on your mind is worth equity.”

When (not) to take seed capital

Seed capital is not meant to be used as working capital. “Using equity on working capital puts you in a place where your equity is very expensive,” explains Dan. “In a year’s time, you might look down and not own your company.”

Pitch investors at the right time

Approach investors with your vision—not your metrics. “What we raised off was what we were going to build,” says Jack. “What is our brand? How big will it be? It was too early for us to raise off of numbers. If your numbers are that good, why would you raise capital?”

“When I approached investors after 8 years of running my own DTC brand, our numbers were a mess, so were our metrics,” adds Maxx. “But it really came down to traction and our history with what we’ve been building. In DTC, unless you’re building a new product idea and innovating like crazy, I would ask yourself why you’re raising seed capital or early-stage VC at that stage.“

"Pre-seed, the investment is often in the founders. You need to show growth but also a belief in the company—if you can’t sell the vision of your company, what are you going to sell?,” says Dan.

Set aside time for the process

“Raising money always takes longer than you think it’ll take, but if you can keep yourself going without having to put a massive amount of pressure on yourself, you’re putting yourself in a position where the valuation can be higher,” says Dan. “Are you able to keep the doors open for a little longer by using alt sources of capital?”

If you need to save time, find ways to keep work to a minimum. “We only raised SAFE notes to have less legal jargon,” says Jack. “It saved us lots of time.”